Chinthi Weerasinghe is now taking the small actions she believes will lead to significant future changes.  Having built an impressive career in technology, the CEO of Mitra’s digital business unit aims to inspire the next generation of Sri Lankan women, opening their eyes to the diverse possibilities in the traditionally male-dominated tech industry.

Weerasinghe is a founding member of the non-profit Diversity Collective Lanka (DCLK) which works with schools and higher education institutes to empower and inspire young women. DCLK has identified 50 schoolgirls from outside Colombo they are mentoring and supporting.  The expectation is to inspire these girls to pursue opportunities in the tech sector. Besides empowering women, this will benefit the industry itself through the increasing quantity and diversity of talent.

“Tech is an industry Sri Lanka should take by its horns. But we have a capacity issue. When you look under the covers, we have a lot of women doing STEM subjects, going to university, but many do not contribute back to the economy via the workforce.”

This capacity challenge, compounded by high-skilled workers migrating for higher pay and international exposure, is impacting the industry. “We are a billion-dollar industry now with expectations to become a five billion dollar industry in a few years, but that means we need to increase the capacity five-fold. If women are studying but not contributing, how do we do it?” she asks.

“Our customer base is 50% women, so who better to feel what their experience would look like using a product than another woman?”

Encouraging more women into tech benefits, not just those who are doing the work, but the end-users of the products themselves. Take, for example, the recent rise of the term ‘Femtech’ to describe apps and products that aim to service women’s health and wellness needs.

Whether you love the term for shining a spotlight on an overlooked area or hate it, for presenting the needs of half the world’s population as a ‘niche’, it’s unlikely these products would have been thought of a decade ago when the industry was even more male-dominated. Products designed for the needs of women have not often been at the forefront of tech. This, however, is changing, and as the technology itself becomes more personalised, having more women involved in the process can only be a good thing.

“Earlier tech was about serving corporates, but tech today is about serving individuals,” Weerasinghe points out. “Our customer base is 50% women, so who better to feel what their experience would look like using a product than another woman?” Weerasinghe credits her confidence and success to her strong matriarchal upbringing – her mother and grandmother were both teachers who encouraged her to explore music and drama as well as the sciences.

Following her graduation, with a degree in information systems from the University of Manchester, she joined Virtusa, where she stayed for over a decade. While working for the firm in America, age 28, her then-boss told her she could make it to CEO one day. That feedback was a tipping point and spurred Weerasinghe on to challenge herself. In 2011 she joined the much larger CIBER Inc where she stayed for three years before being tempted back to Virtusa as Vice President in “her dream job”, back in Sri Lanka in 2014. By then Virtusa had transformed entirely from the company she joined in 1999 with 200 employees in Sri Lanka, to one with 25,000 worldwide.

In Jan 2019, seeking an opportunity to be more impactful and influence growth, she was attracted to a company with “all the raw ingredients.” Weerasinghe joined Mitra Innovation as the CEO for the Digital Business unit. Mitra Innovation, the parent company, employs 200 people at five offices globally. Developed from the start with a global focus, it aims to create ‘simplicity through innovation’ and challenges its clients to think differently. Weerasinghe hopes to grow the business to 1,000 employees and the company revenue to $30-40 million from the current $7 million in the next five years.

As a female leader in the tech industry, Weerasinghe would like to see more women in tech, step forward to mentor young girls. With only 27% of management positions held by women in Sri Lanka, the challenge is not only to identify women comfortable with representing themselves as mentors but also to find relatable idols who come from various industries and regions. Weerasinghe wants to show the next generation of women that tech careers are stable and that there are myriad choices beyond coding. 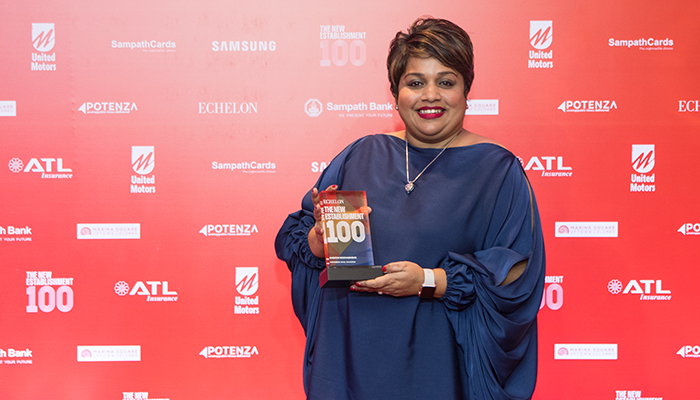