Harsha Purasinghe was not going to wait for the fourth industrial revolution to sweep over him. Being ‘prepared’ was not good enough either. Purasinghe wanted to do his part, by harnessing the new tech precipitating the revolution.

Purasinghe was willing to stake it all to develop a digital human resources management platform at a time when the fourth industrial revolution, or Industrial 4.0, was but a concept. He founded Microimage as a startup in the early 1990’s and is still famous for developing a Sinhala language font. The company later made its mark developing HR systems that were popular with Sri Lankan businesses and a handful of users in the Maldives and Malaysia, and a single client in Pakistan.

In 2015, Purasinghe developed MiHCM, a cloud-based digital human capital management platform, also accessible by mobile devices that can support a range of functions from recruitment to leave management and performance evaluation. It uses data analytics technology to generate real-time reports for various levels of decision-makers across an organisation. By October 2019, MiHCM was used by 77,000 people in 200 companies across 15 countries. Group revenue of Microimage had doubled to $2 million in this period.

“I saw the digital revolution coming and acted. When it finally arrived, we were ready with a digital platform, and we’re riding the wave,” Purasinghe says. But transforming its core HR product to a digital platform was a significant risk for two reasons. First, businesses had to be willing to entrust their treasured data to a platform built by someone else and then store that data on the cloud. Hosting the platform on Microsoft Azure overcame this challenge.

“It’s a scary era. Now the combined disruption can take businesses by storm, or a country’s economy for that matter.”

Second, revenue would take a hit as well. Earlier, clients made a one-off payment to acquire a tailor-made Microimage HR system and paid an annual service charge for maintenance. However, MiHCM is a monthly subscription, which means no more one-off windfalls after a sale. “We had no choice but scale the business to avoid a crash and burn,” Purasinghe says.

Purasinghe had designed a platform agile enough to be continuously upgraded, which made it easier to rewrite the code to account for local languages, statutory requirements and labour laws unique to each market.

“Once we reconfigure the platform to suit a specific country we can then go in to acquire new customers and build the business,” he says. To market his product, Purasinghe partners local vendors who are paid a share of the monthly subscription income. The ability to customise MiHCM gave Microimage an edge over the one-size-fits-all products offered by global heavyweights like SAP and Oracle across ASEAN, Purasinghe says. The company is now venturing to Australia and New Zealand.

“We want to compete in developed markets and compete with the best in the world, but for now we will focus on the Asia Pacific region until we see similar opportunities in the Middle East, Africa and Europe. For Purasinghe, MiHCM fulfils a critical need in the digital age. Digital technology is transforming the workplace.

Collaboration tools will bring together retirees, millennials and generations Y and Z—the later, particularly hyper-connected from growing up with tech—who along with bots will revolutionise the workplace. If companies don’t reimagine and restructure the workplace to be relevant, they will not survive the Industry 4.0 revolution. It will be critical that people can engage their workplace from anywhere in the world, he says.

“We want to play a role in all this and help companies augment the workforce, workplace and work experiences for a new age,” Purasinghe says. “The platform should be accessible from anywhere, which means everything has to be on the cloud. Everything must be mobile-enabled, which is one of the things we’ve solved.”

Unlike the previous industrial revolution with computers, Industry 4.0— with its host of technologies around AI, robotics, drones, IoT, industrial automation and the cloud—has the potential to drive exponential growth for businesses or an economy. “It’s a scary era,” Purasinghe says, because previously innovations were linear and incremental. “Now the combined disruption can take businesses by storm, or a country’s economy for that matter.”

Purasinghe believes many businesses are still too comfortable with their successes and don’t appreciate the forces now shaping the word will soon disrupt them. Appreciating the power of these forces and harnessing that to their purpose, can propel a company forward. “That’s why this era is both exciting and challenging. If we are not on top of the game, we risk banishment into oblivion.” 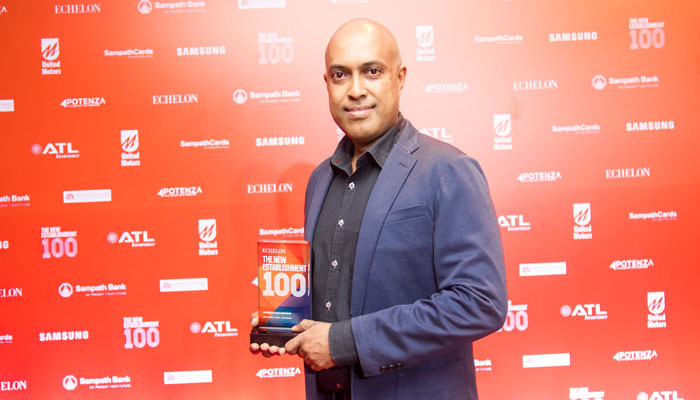