Heminda Jayaweera believes that Sri Lanka’s potential is severely under-realised, both with talent and resources. In May 2019 he was appointed Chief Operating Officer at Sri Lanka Institute of Nanotechnology (SLINTEC), a unique public-funded, private-run science and technology facility. He is also Director of Capacity Building at SLYCAN Trust, which is working towards a sustainable environment, economy, and society. At SLINTEC, Jayaweera brings a product management and lean startup mindset that is helping companies ensure scientific research can be commercialised.

He wants more companies to take advantage of the technology facilities at SLINTEC to “leapfrog into the future” and become global players. After over a decade at Dialog & Dialog Axiata, Jayaweera’s personal start-up journey began in 2015 when he co-founded the Internet of Things (IoT) based company Effective Solutions. Over the last four years he has co-founded numerous startups including Jendo Innovations, a medtech startup that uses a software algorithm to assess patients’ cardiovascular health based only on their pulse – no blood samples required.

Sri Lanka’s graphite is the base for manufacturing high-quality graphene, a substance used in lithium batteries, solar panels, efficient and precise sensors and even anti-corrosion coatings and paints.

Jendo Innovations developed from Jayaweera’s fear of needles, while Thuru, which he co-founded in 2017 came from his love of the outdoors. A passionate hiker since the age of 14, Jayaweera has seen the effects of climate change with his own eyes. The Thuru app incentivises people to plant trees and has over 20,000 users.

To supply saplings, Thuru began investing in nurseries but distribution on a mass scale was a challenge. Thus a nano-technology seed pod was developed, allowing seeds to be suspended for 2-3 months before planting and germination. He also co-founded Zero Trash, which launched in 2019 to tackle Sri Lanka’s recycling challenge.

Currently, the business delivers two tonnes of plastic rubbish to recycling centres per month, equivalent to 50,000 plastic bottles. Jayaweera expects to scale the business to over 50 tonnes in the next two years, revenue will then come from developing their own up-cycling. His work encouraging and consulting startups at the University of Moratuwa through Mora Ventures led him to co-found Venture Frontier Lanka in 2018, aiming to create an entrepreneurial ecosystem in all Sri Lanka universities. Jayaweera sees significant opportunities for Sri Lanka within the tech space.

High-tech exports currently account for only 1% of overall exports – the same level as the 1970s. Graphite is a prime example. Sri Lanka’s graphite is the purest in the world and two years ago SLINTEC came up with the technology to change graphite into the ‘wonder material’ graphene.

This process creates a value addition of up to 5,000 times—graphite fetches $2 per kilo while graphene sells for $10,000 kilo. Sri Lanka’s graphite is the base for manufacturing high-quality graphene, a substance used in lithium batteries, solar panels, efficient and precise sensors and even anti-corrosion coatings and paints.

Through SLINTEC, Jayaweera is a Director of newly formed joint venture, Ceylon Graphene Technologies that produces graphene. The company expects to earn $1 billion in five years. Sri Lanka exports 1,500 metric tonnes of graphite per year. If transformed into graphene in the country, this value addition could generate billions of dollars and kick-start the chain for other high-tech exports. Jayaweera’s target is to increase Sri Lanka’s high-tech exports to 5% by 2024. He believes the talent and technology are already in place to achieve this. 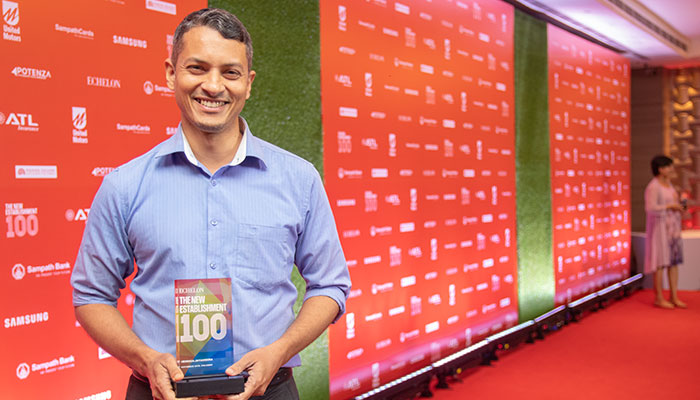