Lead time, from order placement to delivery, has been a long-standing challenge for apparel companies. Customers demand their products be delivered fast. Demand leaning towards customised products and small orders exacerbates the challenge. Usually, it takes a month from order to delivery.

MAS Holdings has developed digital tools that allow small, frequent order quantities to be placed in a suburban mid-west town in the U.S. to show up at the firm’s factory in Sri Lanka instantly. With the shortened administrative process, the lead time has been reduced to 10 days, Jehan Mutaliph says. Now they are experimenting to reduce this period to 5 days.

A computer engineering graduate from the University of Moratuwa, Mutaliph was initially drawn to MAS Holdings as it was one of the first firms in South Asia to utilise SAP.

Mutaliph is leading this effort. The group’s B2B clients are excited because the end-consumer is satisfied. MAS Holdings gets a more significant piece of the pie by fulfilling these orders. The Chief Digital Officer’s unit was set up in 2018 to experiment and adopt digital processes to propel MAS Holdings to leapfrog competition and stay relevant over the next five years.

Technologies that take over five years to commercialise are ignored, including 3D-printed garments and blockchains. “If I’m investing in tech meant to be operational in five years, I’m losing out on profits in the short-term which can be re-invested,” Mutaliph says. Some of the Digital Team’s initiatives include developing AI to fulfil repetitive and mundane work, automating production through robotics and futureproofing against fluctuating demand by pushing for customised garments and new business models

“If only MAS has this tech, then our clients have to develop one process for us, and different processes for other suppliers. If we license the tech to other apparel manufacturers, the clients and the entire country benefits,” Mutaliph says. A computer engineering graduate from the University of Moratuwa, Mutaliph was initially drawn to MAS Holdings as it was one of the first firms in South Asia to utilise SAP.

After a brief stint at a British e-commerce platform, Mutaliph returned to the MAS Group in 2013 as the chief information officer, a post with 150 team members which now reports to him. However, most of his attention is spent on the 30-member digital team, where data and digital evangelists innovate new tools and attempt to convince both the group’s clients and employees of their future potential. 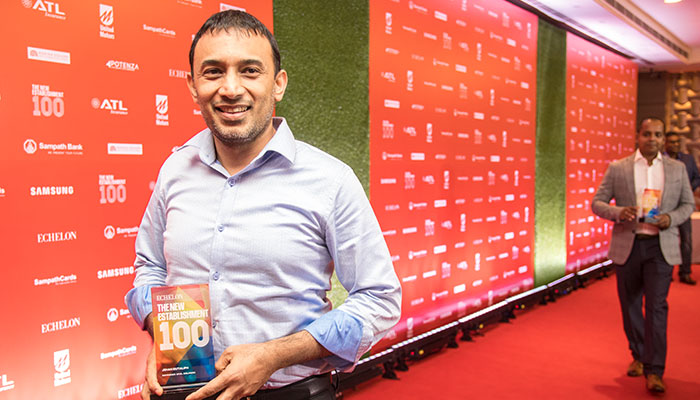