Krishan Balendra took leadership at Sri Lanka’s largest listed company, John Keells Holdings (JKH) in early 2019, where he is chairman of the board. At JKH the chairman also holds the responsibility of a group chief executive.  Balendra takes leadership of JKH, which has an extensive portfolio of businesses, at a time when Sri Lanka is climbing the economic middle-income league table. The group controls 70 companies in seven industry sectors.

“Even with modest economic growth of say 5% a year, all our businesses will grow. Growth will have an impact on banking, insurance, consumer products, supermarkets and even property development. Sri Lanka’s $4,000 per capita GDP will be substantially higher in five to ten years.”Balendra joined JKH in 2002. He worked in several areas of the group, including corporate finance and hotels.

“The brick-and-mortar grocery retail model won’t change anytime soon because people want to see the meats and feel the fruits and vegetables.”

However, his time leading the Keells supermarket business, where he scaled the unit and introduced world-class processes is one of his most notable recent achievements. Keells supermarkets are a substantial contributor to the group’s profits and are well-positioned to benefit from the rising incomes of Sri Lankans. When the JKH leadership set its five-year strategy in 2017, the group analysed the economies of upper-middle-income countries in the region to understand how their businesses evolved when they rose up the income league table.

Between 10-20 years ago, Malaysia and Thailand experienced the same consumer momentum seen in Sri Lanka today. If JKH controlled businesses retain their leadership positions by enhancing customer value, it should be in a formidable position when Sri Lanka’s per capita income increases 50% over the next few years to $6,000.

“Consumption will leap during this period as prosperity increases like it rightly should,” Balendra says. Around 16% of grocery sales are at supermarkets, compared to 45% in Thailand and over 50% in Malaysia, Balendra says. This points to tremendous growth opportunities for Keells’ supermarkets and food and beverage business. Does it perceive a threat from startups and online retailers? “The brick-and-mortar grocery retail model won’t change anytime soon because people want to see the meats and feel the fruits and vegetables,” Balendra says. However, the group’s online store was the first of its kind and it is updating its mobile app to improve the user experience.

A significant portion of JKH’s capital is invested in its hotel business. Besides consumer-led demand, Balendra anticipates that Sri Lanka’s emergence as a significant Asian tourism destination will have the greatest impact on the country.  Sri Lanka attracts around two million tourists annually, generating $3.5 billion in revenue.“The little island of Bali gets seven million tourists, Cambodia six million and Vietnam 15 million. If Sri Lanka can attract five million tourists and if earnings can improve to $10 billion, that will be tremendous for the economy,” Balendra says.

Across the Palk Strait, India is emerging as a significant tourism generating market and that is encouraging. Indian globe trotters are expected to more than double to 50 million over the next five years. Demand will grow not just for JKH’s hotels but other businesses such as apartments. Following the Easter Sunday bombings, the Indian market staged the fastest recovery.

“Tourism has a multiplier effect on the economy. We are positioned not just to benefit from the tourism opportunity because we have hotels positioned across the country and a land bank we can develop; but when tourism drives prosperity our consumer, financial services and other business will all benefit.”  All of JKH’s assets, bar four hotels in the Maldives, are in Sri Lanka.

“It should be an exciting ten years for Sri Lanka and JKH,” Balendra adds.  While confident about its strategy, can JKH—often perceived as an organisation with traditional structures and legacy businesses—be nimble and evolve fast enough in the face of the digital-driven industrial revolution? Balendra is positive the group’s next crop of leaders will have the desire and drive to chart that course. “They will be prepared to change, and they will want the change,” he says.

“One of the big positives of being a legacy company is that the leadership changes every 10-15 years, giving space for fresh and young ideas. That helps the company to modernise because its ultimately about the people. Assets or the buildings don’t drive change,” Balendra adds. While entrenched in brick-and-mortar businesses poised to ride Sri Lanka’s economic trajectory, the group is investing in digital capabilities to drive productivity and profitability in existing companies.  For now, Balendra sees no need to look for the next significant growth sectors. The group’s investments in the past decade have positioned it strategically for the next ten years. 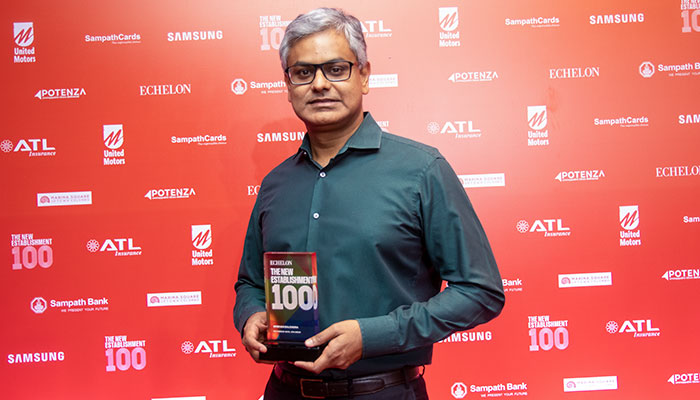