When Sri Lanka emerged from the civil war in 2009, not many firms had internationally competitive management practices. After three decades of being tempered by the realities of conflict, companies had become conservative. The sole strategy in some of Sri Lanka’s asset-rich large corporates had been to invest in real estate.

Kumudu Gunasekera was then based in the U.S. as principal economist at Parsons Brickerhoff, a global professional services firm offering advisory and project & program delivery on transportation & infrastructure, property & buildings, environment, industry, resources and energy sectors. Gunasekera had received his PhD in Economic Geography from Boston University, building on his earlier studies in economics, international relations and environmental policy.

He felt a growing urge for helping Sri Lanka rebuild after the civil war and returned to his homeland in 2013. He had been born in a developing country, and he did not want Sri Lanka to remain as such by the time he died. He had arrived in Sri Lanka with an idea, that the country and firms should have a 100-year plan, executed in granular 3-5 year segments without losing sight of the big picture.

After all, Sri Lanka would be celebrating a century of independence by 2048 but had no plan to develop itself. Gunasekera attempted to convince companies that they needed more than ‘safe’ growth; that there needs to be innovation and internal optimisation for exponential growth. Essentially, Gunasekera was offering the services of a management consultant; a profession which was well established in advanced markets, but was in its nascence in Sri Lanka.

“Companies need more than ‘safe’ growth; that there needs to be innovation and internal optimisation for exponential growth.”

“I don’t think management consultancy was an industry here, even five years ago,” he says. He joined Stax, a U.S.-based management consultancy firm which was growing its business in Sri Lanka. But Stax had few early clients. The private sector had been sceptical of hiring management consultants. “Companies didn’t want to pay for something intangible. They were used to buying products. Companies were willing to spend a million dollars on an Enterprise Resource Planning System, but they weren’t ready to spend a fraction of that to understand why they needed it and how best to optimise its output.”

With lukewarm reception locally, Stax’s local office had to manage back-office processes for its U.S.-based operations to survive.

Gunasekera was not deterred and continued his evangelism, preaching the need for firms to turn to global markets, build brands and increase productivity, and that there were experts who could enable them. As word of Stax’s effective consultancy services slowly spread, so did its client list. “A lot of companies realized that they cannot remain asset-rich and that they have to compete to earn profits.”

Now Stax’s Sri Lankan office handles 50-60 projects of leading corporates annually. It has also wooed some regional clients. With the acceptance of management consultancy as a practice, other international firms are also canvassing business in Sri Lanka. Despite improvements in corporate mindsets, Gunasekera says that some firms still disregard evidence-based decision making. Some exporters are opting to individually explore each foreign market and find their way based on anecdotes, instead of conducting market research on dozens of countries at once, picking the best and then branding products to cater to nuances in tastes.

“Companies still think opportunistically. Some still want to send market executives to a foreign country for a week with sample shipments and meet potential buyers. This drip spending has burned a lot of companies. These small amounts add up. Instead, if they deterministically spent more upfront to understand each market and develop a strategic plan, their probabilities of success would be much higher.” Gunasekera believes that as newer, dynamic generations rise up the corporate ladder, firms would be even more willing to listen to his message.

For now, 80% of the local Stax office’s revenue is derived from handling some processes of its U.S. offices. Gunasekera wants revenue from Sri Lanka and the Asia Pacific region to grow. In Singapore, the Stax office established has to compete heavily, due to an overcrowded market. However, with an overwhelming positive response from Australia and New Zealand, Gunasekera will establish a new office in Australia soon, while maintaining Sri Lanka as the regional headquarters.

Perhaps even more important than revenue is the fact that Stax is Sri Lanka’s largest management consultancy firm. Gunasekera is now in a position to reshape Sri Lanka’s corporate future. He is inching closer to the goal he had when he returned to Sri Lanka six years ago. 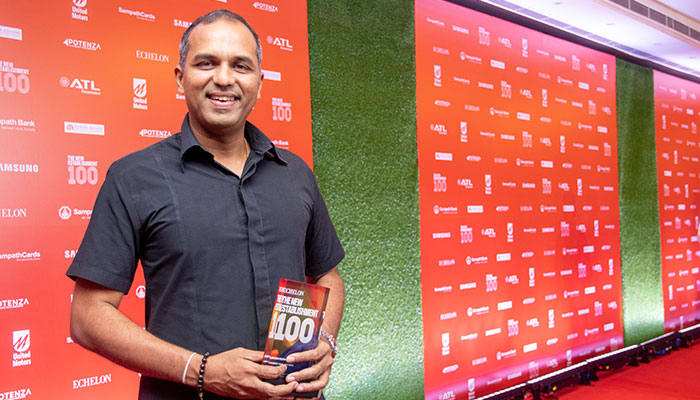