As a Managing Director of consulting firm Stax and with over two decades of experience under his belt, Ruwindhu Peiris knows a thing or two about what makes companies successful. Peiris credits his ‘anything is possible’ mindset partly to being in the right place at the right time. He graduated in engineering, electrical & computer science in Canada in 1998 and joined Nortel during the dot-com boom.

Two years later, he returned to Sri Lanka and spent a year at the John Keells Group before joining Virtusa. At the time, Virtusa was still operating out of a house adapted as an office, somehow squeezing in almost 100 employees. A period of intense growth followed both for the company and at a personal level. Asia was transitioning from being seen as a market for remedial work to becoming valued for people and partnerships that could drive businesses forward.

Within ten years, Peiris was promoted to one of the youngest Vice Presidents in the company. When he left a decade later, he was Vice President & Head of Operations – Global Services. He moved to the then little known business with 22 employees, called Stax in 2010. At the time, a large part of Stax’s business was due diligence for private equity firms on potential investments. Peiris was excited by the opportunity of not only working with great companies but being part of identifying the next generation of great firms.

In recent years, Peiris has also been a Director of the Lankan Angel Network and a Chairman of SLASSCOM, the influential IT and BPO industry body here. Stax was founded in Boston in 1994 to serve corporate and private equity clients. The company opened several offices across America before opening in Colombo in 2005, a strategic move to service client needs in Asia and to support the U.S.-based business.

Today Stax has 80 employees in Colombo. The office has increased its revenue-over- headcount by building up technical skills in areas like modelling and data analytics that would be cost-prohibitive in the US, where their major client base is located. These technical skills are providing a way for Stax to stand out on the global scale.

Take for example the Data Room, a depositary of documents as part of an investment deal that Peiris says, is rarely looked at in detail because of the time and effort required. While most investors may take an entry level look, Stax’s Colombo office can dig deep and unlock nuggets of information that help their clients make more informed decisions. Stax is hoping to grow five-fold in the next five years. “We want to have a disproportionate growth”, Peiris says, “We feel like we’re in a situation that has tremendous opportunity.”

Currently 80% of the business is international and 20% Sri Lankan, but the latter is growing. Local opportunities include the execution space, where Stax’s local insight can add value to their clients in a nuanced way that the ‘Big 4’ companies cannot match. They are also helping local businesses go international, including tackling the challenging ‘softer part’ of expansions – the internal politics and nuances.

Insights as a service are the area most exciting to Peiris. In Sri Lanka, the scale isn’t big enough for most companies to warrant an in-house investment in data architecture, so Stax is positioning itself to be an on-tap service, providing companies with data insights that will make the most significant difference.

“This is something we’re already doing globally and we’re bringing it to Sri Lanka” Peiris says. Peiris doesn’t just want his clients to dream-big, he’d also like to see a more long-term view taken to the challenges facing the nation. “We’ve become so obsessed with the immediacy that we’ve lost the sense of grandeur about the scale of things. The past is forgotten, and we’re not looking to the future.”

Peiris himself is looking ahead to Sri Lanka at 100 and hoping for significant change. “I was born into a developing country, I don’t want to die in a developing country”. The key, he believes, is to engage with the 10-15 years olds today, the ‘next establishment’. In thirty years, they will be the 40-55-year-olds driving the country and the question he asks: “How do we invest in them now to make a meaningful difference?” 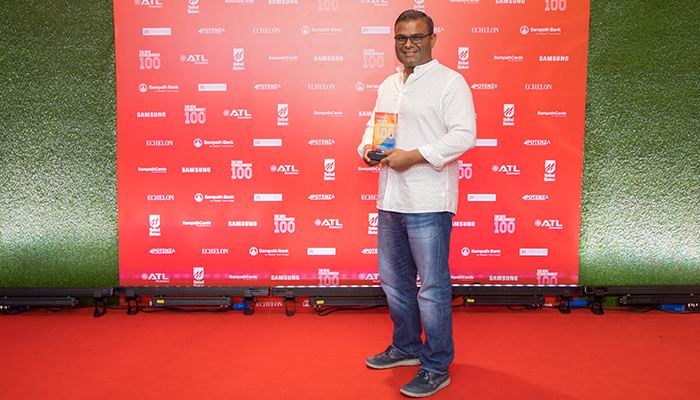