Hailing from Kandaoluwawa, a village in Gampaha that even Google has not heard of, Subhashini Abeysinghe has risen to become Research Director at the think tank Verité Research, after ignoring pleas from her family to become a teacher. Now a famous economist known for her work on both trade and public finance, Abeysinghe says her family still has little clue of what she exactly does.

“Lack of accountability of public servants is a severe drawback to the development of Sri Lanka’s economy.”

Abeysinghe was attracted to economic research while she was waiting to enter the University of Colombo. Due to political issues, university entrance was delayed by two years. Not content with sitting at home, Abeysinghe applied for jobs, including at the Institute of Policy Studies, a premier think-tank, which hired her as a receptionist. She also met Verité Founder Nishan de Mel at IPS. The workload as a receptionist was light, and academics at IPS would end up enrolling Abeysinghe’s help in their research. She was exposed to economic and mathematical literature that would form the core of her learning later on in university. She would go on to earn Masters degrees in Economics from Colombo University, and the World Trade Institute in Switzerland.

After working for a decade at the Ceylon Chamber of Commerce research unit, Abeysinghe moved to Verité as Senior Analyst in 2013. A break in creating policy awareness occurred when she tweeted that the term ‘public service’ in Sinhala should be changed from its current meaning of ‘Rajya Sevaya’ (state service) to the more accurate ‘Mahajana Sevaya’ (public service). This she said will remind state officials that their allegiance should be with the taxpayer and not their political overlords. The statement went viral, spilling over social media and was even shared by her fellow villagers, finally giving them an inkling of what she does.

Abeysinghe emphasizes that the lack of accountability of public servants is a severe drawback to the development of Sri Lanka’s economy. Politicians who disappoint voters are voted-out every five years. However, public officials remain in service. Verité is now generating traction on the issue. The challenge was for academics at the thinktank, who work predominantly in English, to convey the message effectively in a creative manner to the Sinhala and Tamil speaking masses. It turned to a strategy which makes fake news successful; sarcasm and satire, used with digestible, familiar concepts.

Verité has grown from the 15 employees when Abeysinghe joined in 2013, to over 70. The think tank undertakes any socio-economic research that furthers the common good and is now working with a host of multilateral partners. It is a go-to agency for analysis on media, public policy and the economy. 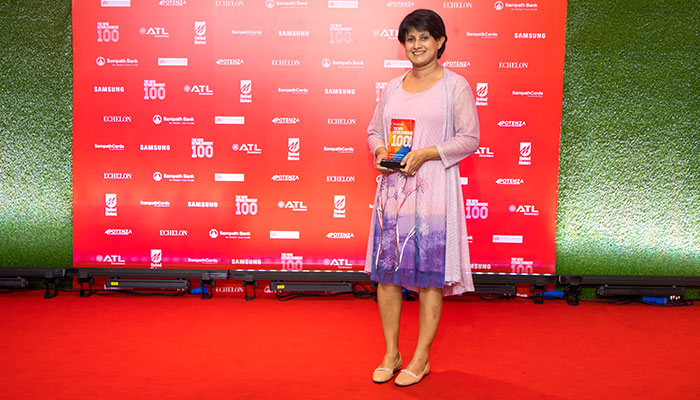