Few industries have had as profound an impact on wellbeing as mobile communications. Extensive coverage at a very low-cost put Sri Lanka at the forefront of mobile telecom. This achievement was repeated with mobile internet access on a smartphone. Today, Sri Lanka is among the top five cheapest countries in the world for internet data.

Reaching 91% of Sri Lanka’s population, and 67% of Sri Lankan households through its mobile broadband and fixed broadband networks, Dialog Axiata, has played a pivotal role in driving these transformations. The changing consumer behaviour is reflected in Dialog’s financial results where data, both fixed and mobile, now account for over half of revenue. The success of delivering world-class broadband connectivity solutions helped the company accelerate growth and cross the Rs100 billion revenue mark in 2018.

It took Dialog 17 years to make its first Rs50 billion, whereas the second came in just five.  According to Dialog’s chief executive Supun Weerasinghe, the next wave of transformation is one reaching beyond affordable internet access. In fact, he highlighted that “the transformation that happened with mobile over the last 20 years will take digital five years. This transformation, led by the rapid evolution of digital technology, poses considerable challenges for telcos worldwide, but Dialog is manoeuvring to an unassailable position.”

“We certainly don’t want to relegate ourselves to a simple dumb pipe.”

Mobile industry revenue has come in four waves. Revenue from the earliest two — voice followed by messaging — have virtually disappeared in developed countries and are declining rapidly everywhere else. On the other hand, the third — data — is growing exponentially in both rich and emerging markets as consumers demand more and better media, particularly high-quality video.

The fourth is the potential for telcos themselves to become OTT (over the top) players, and provide media content, as well as many other services. For the first three waves, operators only competed with one another. For the fourth wave of revenue, they are up against the internet giants and thousands of startups from the likes of movie streaming companies such as Netflix, to voice-over-internet protocol players like WhatsApp and Viber, who continue to eat at traditional voice revenue and build direct relationships with customers.

Successful operators in the fourth wave will be the ones who digitally transform their offering and be more like OTTs, add content and digital services. Compared to other OTT players, telcos will also have the added advantages and insights that come with owning the network. “We certainly don’t want to relegate ourselves to a simple dumb pipe,” says Weerasinghe. However, the challenge with the digital strategy is that the local ecosystem must grow.

Although Sri Lanka is a global leader in coverage, affordability of mobile services and internet access on smart devices, digital adoption by individuals, communities, and public and private sectors have lagged. Sri Lanka’s digital transformation needs a seismic shift in the adoption speed to create significant economic value for stakeholders and realise the country’s digital potential, Weerasinghe says.

In markets where digital adoption has been successful, private and public sectors have often worked in partnership to invest in digital infrastructure, drive digitalisation, and enable the demand for digital solutions not limited to finance, retail, agriculture, healthcare, and logistics. “A tool to reliably authenticate online users is critical to driving mass digital services adoption,” suggests Weerasinghe.

Every country that has achieved faster adoption has had a digital ID for every citizen. To build digital capability, Dialog is exposing its APIs (Application Programming Interfaces) to third party businesses allowing them to develop various consumer solutions. Ideamart is Dialog’s platform for developers and content providers to use these APIs to create applications to connect communities or digitise businesses.

Today over 10,000 developers offer their services through this platform. Dialog also collaborated with various industries to extend its capabilities to health-tech, edu-tech and fintech. For example, Dialog has partnered with Sri Lanka’s leading private hospitals to create Doc990, a mobile app to channel doctors, buy medicine, get lab results, maintain medical records and call for home and emergency services.

“In places like Hong Kong or China, there’s no paper money. Everything is digital. As a result, world-class digital capabilities that can make a meaningful impact are democratised, and accessible to rural consumers at a very affordable price,” says Weerasinghe.

Sri Lanka risks falling behind, while other regional economies make cataclysmic leaps to reap the benefits and opportunities of digitalisation. Furthermore, the fourth industrial revolution is looming, hurried by the explosions in new digital technologies that will be supported by the next iteration of broadband technology: 5G. Dialog has already commissioned South Asia’s first fully functional and standards-compliant 5G pilot transmission.

For telcos, investing in network technology is always challenging. Invest too early and run the risk of paying a premium. Invest too late, and there is not enough time to realise returns before the next wave of change. “At Dialog, we’ve always invested at the optimal time. We’re in early enough to catch the peak and give ourselves five years or so to realise ROI,” Weerasinghe says.

Weerasinghe says Dialog will continue to invest aggressively in emerging business models and technology. “Mobile technology alone is not going to be the enabler. It’s a combination of fixed and wireless technology. Both are a means to an end in the digital game”. In the next five years, Weerasinghe forecasts that 30% of Dialog’s value will come from digital platforms and enterprise digitalisation. However, its core business—network connectivity and data —will still be a significant 70% share of revenue, he forecasts. Dialog is valued approximately at 3X EBITDA. “Elsewhere in the region, telcos have valuations of up to 7-10X, and this is only for their core telecommunication play,” Weerasinghe says. Valuations reflect the equity market’s lacklustre run. “Investors tend to have higher appetites for telcos moving beyond the dumb pipe and transforming into digital connectivity providers,” he adds. 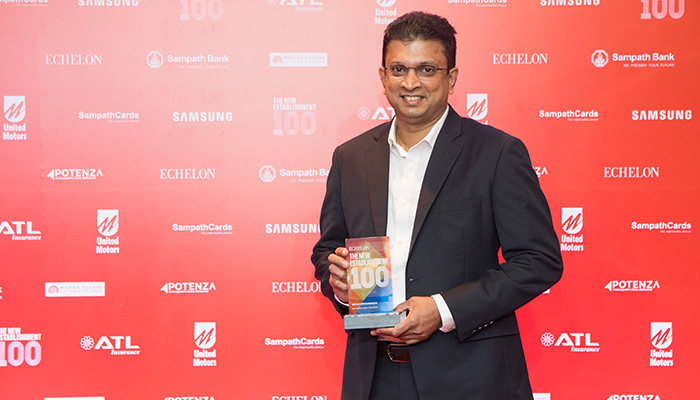