Style is fickle and changes fast. Styles popular in spring will lose their sheen by summer. However, there are some overarching trends which transcend. Suren Fernando believes that functional fashion will be the mega-trend of the future. “Clothing was initially worn to cover yourself up, and then it evolved into brand-conscious fashion, and today, we see demand rising for functional clothing. We will see more of that in the future,” says Fernando who is the chief executive designate at MAS Holdings, an apparel manufacturer which is also Sri Lanka’s largest exporting conglomerate.

According to Fernando, functional wear and wearable technologies will in time come to rival intimate wear in contributions to the MAS Group’s bottom line. MAS is best known as a lingerie and sportswear maker. Still, over the past five years, it has developed functional clothing brands, including menstruation-tech focused ‘THINX’ and ‘Become’ for menopausal females, which are leaders in markets where they are available.

As a part of the functional clothing movement, more categories will converge, similar to athleisure (athletics and leisure) products, Fernando says. But when the world is demanding convergence, can a producer remain fragmented? MAS Holdings had grown to be a $2 billion apparel manufacturer, sewing 3 million pieces of clothing daily, through decentralised operations.

“From the time when I was a child, I wanted to work as an engineer, but during university, my thinking changed and I decided that I shouldn’t limit myself to a specific career. I realised I wanted broader horizons.”

The chief executives of each business unit had the freedom to forge these units as they saw fit, with little interference from the group leadership as long as the subsidiaries worked according to an agreed plan. This had allowed each of the units, whether manufacturing intimate wear, sportswear or leisure, to specialise production and supply chains and woo their own clients. The strategy had provided MAS with agility and flexibility.

“Our business units had plenty of autonomy to operate, and that has been a success factor in the past. But now, we are trying to creatively harness the collective intelligence, knowledge and experience that we have,” Fernando says.

However, as the world changes, MAS is transforming too, as it seeks new markets in East Asia, where clients expect producers to pitch business as a unified group. Integrating the group with harmonised processes is one of the cornerstones of MAS’ Transformation 2025 initiative. The project aims to ensure the group remains a market leader in the future. Fernando will give leadership to the effort and to the entire conglomerate in January 2020 when he becomes the first group chief executive hailing from outside the founding Amalean family.

The task is challenging; as operations span 16 countries, with over 99,000 employees. Even more challenging will be harmonising myriad functions across the group without sacrificing agility and flexibility with which each subsidiary had succeeded in the past.

In Fernando, who had been the chief executive of MAS Intimates, which is the group’s largest unit, from 2016 to 2019, the nuances are ingrained. He will attempt to adopt some of the best practices at Intimates into the wider group. The new movement also resonates with the MAS philosophy of getting more out of existing resources.

Fernando, who is a computing & engineering graduate from the University of Moratuwa with executive education from several leading global universities, has had a rounded experience during his 20year career at MAS. He had initially not wanted to work at an apparel firm. “From the time when I was a child, I wanted to work as an engineer, but during university, my thinking changed and I decided that I shouldn’t limit myself to a specific career.

I realised I wanted broader horizons.” He would go on to acquire the CIMA professional accounting qualification. When he graduated university and had a choice between working at a telco or MAS, he decided on the latter, enamoured by the diverse opportunities he saw at the company. Fernando went on to fulfil multiple roles in operations, finance and marketing. During his leadership at MAS Intimates, Fernando led successful forays into establishing manufacturing plants in Bangladesh and Indonesia.

Now, with some of the group’s key markets and clients in the West in flux due to geopolitics and changing consumer preferences, MAS is poised to break through into the East, for revenue diversification and growth.

Most MAS subsidiaries had several decades to build their business in the West. In the East, MAS will not have such a luxury, if it is to gain market share rapidly. “If we are to be successful in these markets, we need to position ourselves as a conglomerate which can play in multiple product categories, because brands are looking for diversity in products and capabilities.”

To remain competitive, MAS is also venturing into core-adjacent businesses. With some of the world’s most advanced manufacturing and logistical technologies in its vault, the group will look to license these to other manufacturers. MAS Holdings will look to also become a tech-lead company under Fernando’s stewardship. 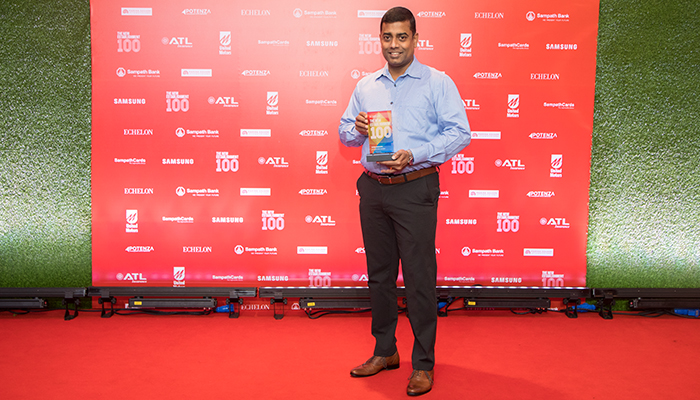