Tilan Wijeyesekera had grand hopes for success when he launched his first business venture in 2015. Within a year, the business had been shut and Wijeyesekera was reminded, the hard way, that above the proposition, the most important thing in business is the people you partner. Mentoring, training and developing the people around him has been a constant passion throughout Wijeyesekera’s career, which has seen him go from marketing in a range of FMCG companies to heading retail banking – a somewhat unusual trajectory.

Leadership requires a diversity of skills, and Wijeyesekera spent the early part of his career-changing roles every two or three years, driven by a desire to keep learning. An initial, if unenjoyable year in auditing at the start of his career taught him financial acumen; a learning that paved the way for business exposure beyond marketing. He has since had jobs at Reckitt Benckiser, Lion Brewery, John Keells Holdings, Ceylon Cold Stores, Janashakthi Insurance and Lanka Milk Foods. In roles ranging from brand management and strategic planning to general management.

In 2011 he joined Seylan Bank as deputy general manager marketing. In his first year he rolled out a new strategy, in a business that was then struggling, pooling all the retail banking products’ marketing budgets to launch a single proposition to announce that Seylan Bank ‘was back’. It generated Rs4 billion in deposit growth in two months, twice as large as the achievement in the eight months prior.

Following this success, the bank realised Wijeyesekera “wasn’t just a marketing guy” and he was given the Rs100 billion liability product department to manage. Other responsibilities followed, satisfying his itch to keep learning. Today he is the deputy general manager – retail banking overlooking nine departments, including personal loans, retail credit and digital banking.

To continue to be relevant, banks have to embrace the rapidly transforming environment, Wijeyesekera believes. They need to understand their customers and the disruptive nature of technology. The challenge now is striking a balance between embracing the new and supporting the old. The core customer base may require a traditional banking product for some time.

The solution to staying relevant?

“Collaboration, collaboration and collaboration”, embracing change, working in partnership with startups and telcos. and using skills outside of the banking industry. Data analytics, AI and digital marketing remain massively underutilised and offer great potential in areas like customer micro-segmentation. The future of banking is not competition with disruptive technologies or companies, but collaborations that leverage the expertise of both parties according to Wijeyesekeara.

Since his first ill-fated venture four years ago, Wijeyesekera has continued to be involved with startups on a personal level. He has invested in several in digital disruption and hospitality as well as a recent project around AI and IoT (Internet of Things).

He is a Director of Loops Creative, the creative arm of Loops Integrated, Sri Lanka’s largest independent digital marketing agency and co-founded social based recruitment platform start-up Joblabs.lk. He is also involved in Sri Lanka’s largest non-traditional media company, which runs leading Sinhala language digital content platforms. Five major platforms are united under this one company in secret – until now.

Wijeyesekera’s partner, “a brilliant tech guy who went into content” founded the first site, Ananmanan.lk, a music, MP3, video and lyrics platform as a hobby in 2003. Wijeyesekera joined as a collaborator in early 2018, bringing his knowledge of strategy, marketing and ROI.

Their other sites include ‘voice of the people’ site Youjudge.lk, news platform Breaking.lk, male lifestyle platform Lifie. lk and female lifestyle platform hadhakari. lk. With combined totals of over 5 million unique visitors and 45 million video/article views per month across the five sites, Wijeyesekera describes the parent company as “the most powerful online platforms company in the country by far.”

The parent company is soon to be re-branded and re-launched with ambitious monetization plans. Wijeyesekera has identified 16 more segments to expand into and aims to do this within three years. So far his involvements has been on the strategy side, but he is looking to become more hands-on.

With a passion for people and a passion for learning, Wijeyesekera has transitioned from marketing to banking to business. At the age of 19, he wanted to be a chief executive, but with a corporate career now established and this milestone within sight, his obvious joy around startup business ventures beg the question – is another change on the horizon? “Perhaps,” he says with a wry smile, “I’m a man in transition”. 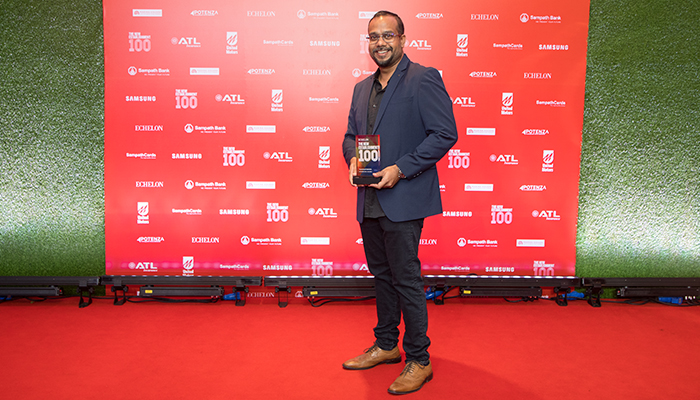